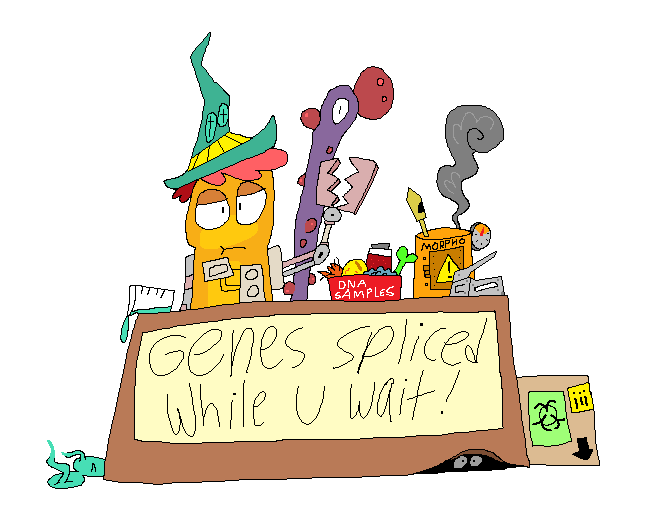 You seem to have come across some kind of stand. As you approach it, the smells of smoke, chemicals, and a faint citrus scent meet your nose. Actually, the "stand" looks more like a cardboard box. Behind the box is an orange slime robo in some kind of wizard hat, and next to them is some weird purple creature. On the counter lie a bunch of doodads and monster parts. The purple thing seems to get excited as you approach, and the slime robo half-heartedly waves when they notice you. They look a little sleepy.

"I'm Maple, if you couldn't tell, and that boil-ridden thing next to me is my assistant, Gibbie. He's not for sale... yet."

"This is an essence an adoption agency for the wackadoodle little mites I've produced. Making little pokemon-things is a bit of a hobby of mine, though I'm also doing it for my genetics major, heh. Some of them I made for the purpose of giving them to others, others were school projects that are... *sigh*, a bit too alive, and since I'm really not in a position to be responsible for pets, I'm giving them away too!"

"These basically work like those web adoptables from 1999 or whatever; if you're a neocities user pick the one you like, and leave a comment on EL's profile so I know you claimed them. Then put the critter on your site. If you don't have a neocities but would still like a critter, DM EL on twitter."

"That's the gist of it, so have a look. Oh, by the way, please take only one for now. Also, if you see EL anywhere tell him he still owes me those 30 bucks I loaned him. *yawn*... pleasejusttakethemoutofmyhands..."

Experiments up for adoption:

Fresh out, unfortunately! But do check back later! I hear Maple's at work in their lab again... -EL

No thanks, take me back to EL's site.