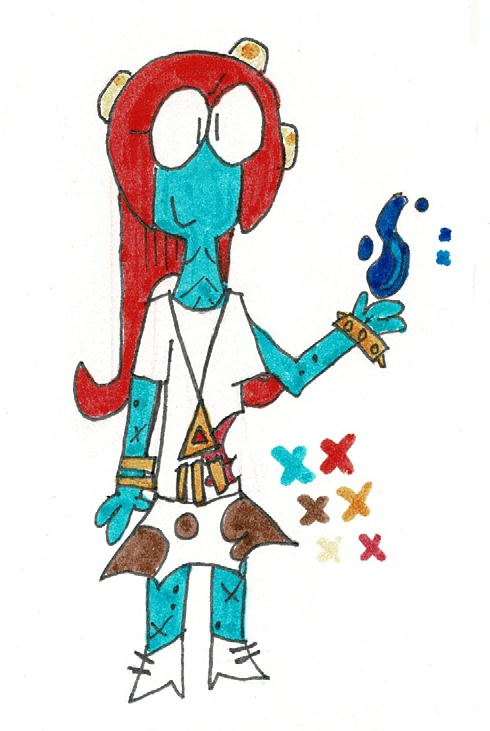 Say hello to Inky the sea witch! The fun-loving Inky lives in the sea off the coast of Jonah and Raph’s homeland, just a short walk away from the Handymen Guild center. While she’s far from evil, she is VERY much a troublemaker, as she loves to spend her time pulling pranks and causing mischief! Being a witch, she possesses some magical powers that she mainly uses for her practical jokes. Inky holds some fascination toward Jonah and Raph, and really wants to be their pals. Often, when the two go on repair jobs, she likes to tag along! This is much to the two’s chagrin, as the witch’s penchant for mischief frequently leaves the job in an even worse state! Jonah and Raph really seem to dislike her, but Inky does know a few ways of having fun without others’ expense...

Likes: hanging out with Jonah and Raph, causing mischief, spells that go “boom” or “poof”, jewelry, cute and pretty things

Disikes: birds trying to pick at her fishy skin, polluted water, having to owe up to her actions

Fun Fact: Inky’s hair has several eyes embedded in it, a skin-like texture, and sometimes can be seen acting on its own accord. Jonah theorizes that this ‘hair’ is actually the ‘true’ Inky, and her body is actually a puppet for the ‘host’. This has not been proven.